How does electronic scale protection work?

Calmat® is a physical water treatment system that does NOT use chemicals or salt. It does not change the chemical mixture of the water. Instead, it changes the physical characteristics of the scale crystals in a way that the scale particles lose their adhesive power. Calmat does not need to have direct contact with the water and sits outside of the pipe.

It treats the water with electric impulses which are generated in the electronic unit and are controlled by a computerized micro-chip. The signal-frequencies are transmitted via the Calmat-impulse-cables that are wrapped around the pipe. The cables interact as pairs and form a frequency-field that changes the crystals in the water as it flows by.

A piping system before and after using calmat®

A faucet before and after using calmat®

Scale deposits inside of pipes or on heating elements create many problems:

The longer you leave your scale problems untouched, the more damage the scale will cause to your system. This could lead to a replacement of the piping system and new equipment.

How does Calmat solve the problem?

Without the Calmat water treatment, the scale particles in the water form sticky crystals that then build solid deposits. The patented Calmat-Impulse-Technology modifies the crystallization of calcium and magnesium using the natural process of electrophoresis. The crystals become smoother and rod-shaped and can no longer attach to each other. Scale is now washed away in the water as a fine powder. The formation of new deposits is stopped. The more rod-shaped crystals that are created, the stronger the positive effect of scale-prevention.

Mono crystals as a result of the Calmat water treatment
When mono-crystals are created by the impulse variation, it is important that they grow as long as possible before they start their way through the piping system. The larger the crystals, the longer it takes until the crystals fall apart again and eventually "die". In warm water, these crystals grow faster and therefore are stronger and live longer. This explains why the Calmat-effect lasts longer in warm water (up to seven days) and shorter in cold water (two days).

Two processes take place simultaneous when hard water is not treated:
A. In the first process, scale deposits result from calcium crystals adhering to each other which then adhere to surfaces, creating the rust and limescale you normally see. This first process naturally produces small amounts of carbonic acid (H2CO3) as a side product.

B. At the same time during a second process, the carbonic acid is simultaneously breaking down the existing scale deposits. This is referred to as the "natural resolving process".
​
​Because the first process of scale build-up takes place much faster and frequent than the natural resolving process, the pipes’ diameter is constantly decreases due to the high amounts of rust and lime scale.

The Calmat water treatment changes the balance between the scaling process and natural resolving process. The nano crystals can no longer form deposits, therefore the scale build-up of the first process is reduced. The natural scale-resolving-process now needs only to deal with existing deposits and can effectively combat them. Thus scale is removed faster than it forms. The natural surplus of carbonic acid dissolves the scale from the scale. Gradually and carefully, the deposits in the pipes will be removed. 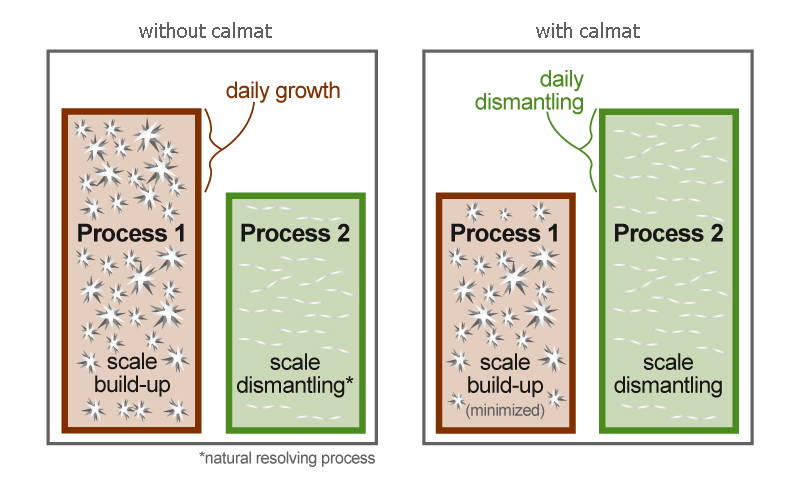 The removal of scale = the removal of rust
As soon as scale deposits have built up, iron particles embed into it. Thus, the scale and the rust blend into one material that are seen as red-colored deposits in the pipe. When the Calmat-treatment dismantles the scale, it simultaneously removes all rust with it.
Clearing out the deposits is a gentle process where scale is brought back into solution and washed out in the water as as : calcium, magnesium and iron. It is absolutely save to drink as these are all healthy minerals.

The removal of scale = the removal of bacteria
We know that scale acts as a breeding ground for bacteria and other unwanted substances. As soon as Calmat is installed and the scale is cleaned away, the bacteria breeding ground disappears. This way, bacterial contamination is greatly reduced or even fully removed.

Copper and/or iron oxidation occurs in all metal pipes through contact with calciferous (hard) water. These oxides seriously affect the pipe surfaces and may lead to corrosion. The Calmat-impulse-technology generates an electrophoresis-effect which produces a protective metal-carbonate layer. According to the material of the pipe, this layer consists of copper-carbonate, iron-carbonate or zinc-carbonate and settles on all shiny metal surfaces. It protects the pipe from aggressive substances which could lead to corrosion. 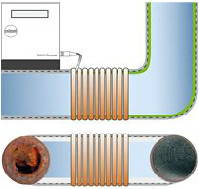